0 In Made to Holiday/ Making Memories/ VACAY!!

If you follow me on Instagram {@theseareyourdays} or facebook {Cute Like Me}, then you know last summer we went away on a fun family getaway. Our first 5 days were spent at the northernmost point of the Shuswap Lake at the most delicious piece of secluded paradise and then we ended our time together in Kelowna. Really, my cousin invited us along to Silver Beach and I totally invited ourselves for the Kelowna portion. Ha! #truestory

We had a fun surprise planned for the kids in Kelowna {fancy/splurgy hotel}, but it was completely booked on the Friday, so we made other arrangements. To keep costs down, I booked us into the cheapest hotel I could find {thank you, Hotwire}. Most hotels in Kelowna are around the $160 mark, which doesn’t exactly qualify as *the cheapest* in my books, so when Hotwire showed an option for $95, we felt like it was the best we would find. After some other digging and comparing with other sites {including actual hotel sites}, that assumption was confirmed. We prepped the kids, saying we were staying in a not fancy hotel at all…but that we were going to visit the cousins the next day at their fancy hotel. Phase One Surprise: Complete!

So look, we weren’t kidding. The Howard Johnson Kelowna is NOT fancy at all. In the words of Jonah, “There wasn’t even an elevator; we had to walk up the stairs to our room!” It looked more like a motel, two story with rooms on the outside as well. The room was basic, clean-ish {some carpet stains, but nothing major}, and a welcome relief after 5 days of camping. BUT, the shower was a strange situation, where it worked with the handle on the left and on the right, one scorching hot and the other freezing cold. And when the handle was in the middle, not a drop. It took some serious fiddling to find a temperature that we could all shower in. And then the toilet decided it didn’t want to flush. #seriously 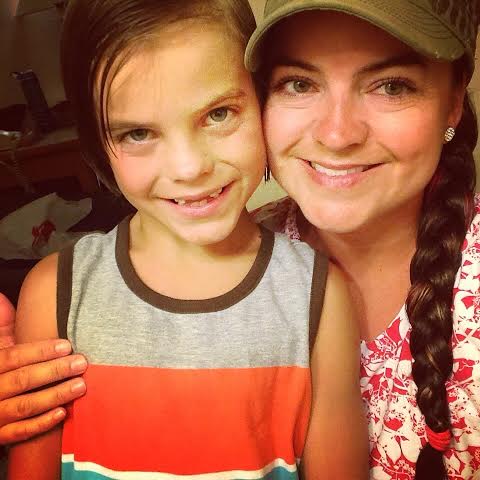 Finally all showered up and ready to head out for dinner.

All worked out and after showering, enjoying dinner at the Cactus Club Café {delish} and a short shopping trip at ONE Boardshop {awesome!}, we all enjoyed a restful sleep. In the morning, we also enjoyed their complimentary continental breakfast. Honestly, it was quite nice, but I’m always impressed whenever a hotel provides a waffle iron. I’m a bit of an easy sell that way.

Because Kelowna hotels are fairly pricey, $95/night {$130 with taxes and fees} was certainly reasonable, but if I’m being honest, and I always am, it felt more like a $60 hotel. That being said, we would definitely stay there again if we were just passing through or wanting to reduce costs for a night. Like I said, it was not fancy in any way, but sometimes all you want is a clean, safe and inexpensive place to sleep. And waffles. 😉

So Many Clowns So Little Time {#OPI}

I Believe In Holidays {And Was Born For It}