Several years ago I read some advice from a seasoned mother where she said that she always tried to be a yes mom. That when her children asked to do or have something, saying yes as often as possible taught them that she trusted them. It’s something that stuck with me and I’ve since encountered numerous moments where I’ve been able to exercise this beautiful piece of wisdom.

I hate arguing with my kids and it’s not that I say yes to avoid an argument per se, but rather I reconsider WHY I’m denying a certain request and if my initial reaction is really the best one. As a result, I’ve been able to witness some truly magical moments of both bonding and imagination. For example:

Cold Winter Day and Jonah is getting antsy being cooped up inside. Playing with his toys, he asks if his toys {pet shops or barbies or cars} can have a swimming pool. My initial reaction is to groan and say no, anticipating the potential for water spilling ALL over. My secondary reaction was to say YES! Of course! Here, let’s lay these big towels down so water doesn’t make the floor slippery. I fill our foot soaking tub/bucket with water and the kids are content and entertained for a LONG time! And we are all happy.

On hot summer days I would fill this same bucket with water and let the kids play in it on the deck. They would sit in it, play in it and then, OF COURSE dump it out a hundred times. The dumping out and having to refill it got annoying for sure, but I really tried to implement this same approach and just keep filling it. If I kept filling it, they kept having fun! It really was worth the mildly annoying inconvenience. lol 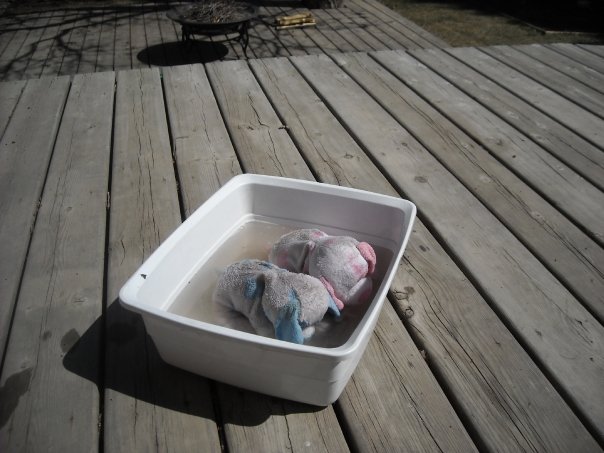 Based on the amount of times the kids have played with the large water tub, I’m surprised this is the only photo I could find! Ugh – But I suppose it’s a decent example as well. First reaction: Don’t put your stuffies in there….second reaction: they are just stuffies and can be washed. Fun. And Done. 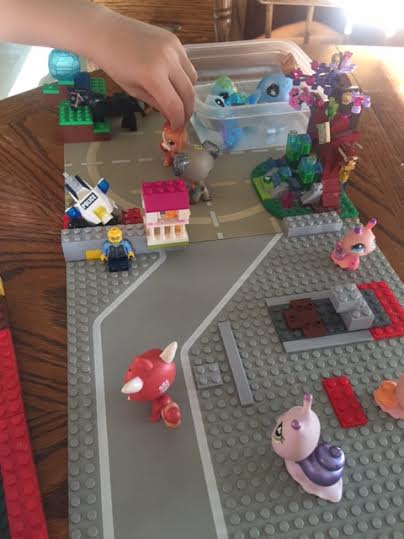 Or just recently Jonah wanted a small *pool* for his pet shops, which was super easy to accommodate and totally added to his play.

Sometimes if we are in a store and they see a cute and less than $5 toy {pet shop or car…I prefer adding to existing toy sets rather than starting new ones}, it’s super fun to say yes when they ask for one. This one does not happen often at all because if there’s one thing we don’t need it’s more stuff. lol But boy I love little spoily times like this – a toy, stopping for ice cream, getting popcorn at the mall, etc. I love the idea that they get to feel like they had a great idea that was heard. And I LOVE when we get to make memories as a result. 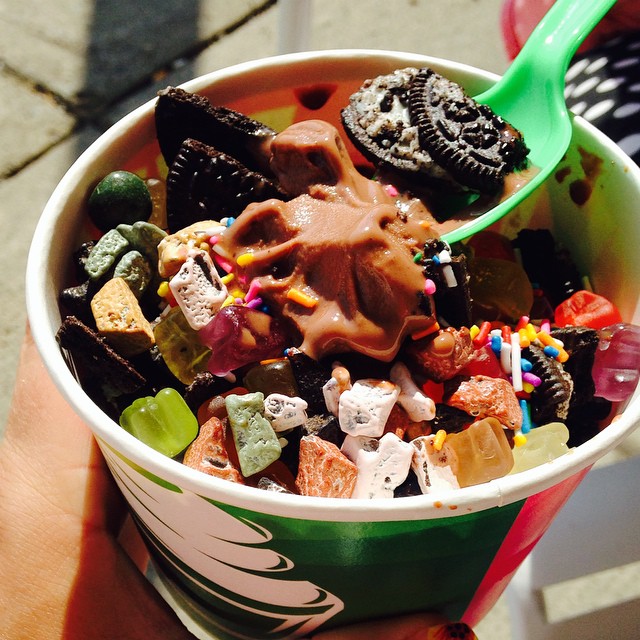 I admit this was the last time we went on a frozen yogurt date because Brooklyn filled this with everything possible and then didn’t eat more than two bites. haha #wasteofmoney

Sometimes they ask to go for a bike ride or a walk at the absolute worst time….and by worst time, I mean when I don’t want to move. haha – but I do my best to remember that sometimes their experience needs to take priority AND everyone benefits from getting fresh air. For me the trick is to almost jump up saying, “Yep! Let’s go!”

Crafting – one of the Captain’s most dreaded times in this house, specifically glitter. But I love watching them make messes while they create….I love letting them play around with supplies even when it means we have glitter and glue and feathers caked around the house for days afterward. Just bought glitter glue and they squeeze one whole tube out at once? Meh – now that one’s gone. Oh well. haha – yes, I try to teach them to use sparingly and to not be wasteful, but there’s a point or an age where I think – just let them create. 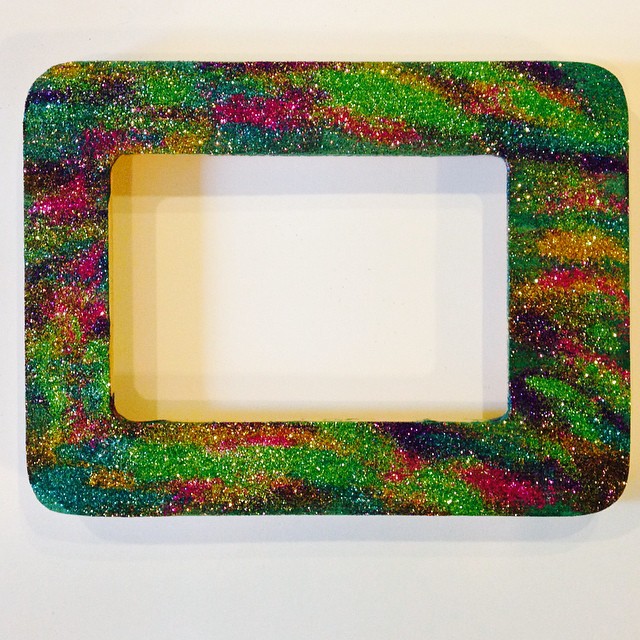 Two things: 1. I absolutely love how this turned out, and 2. I’m pretty sure the glitter mess that resulted nearly gave #thecaptain a heart attack. Seriously.

Playdates – not something that actually happens a whole lot for us anymore because of school night activities, but if it can work, you’d better believe I’m going to try to make it happen. And when they were little we had other kids over all the time! 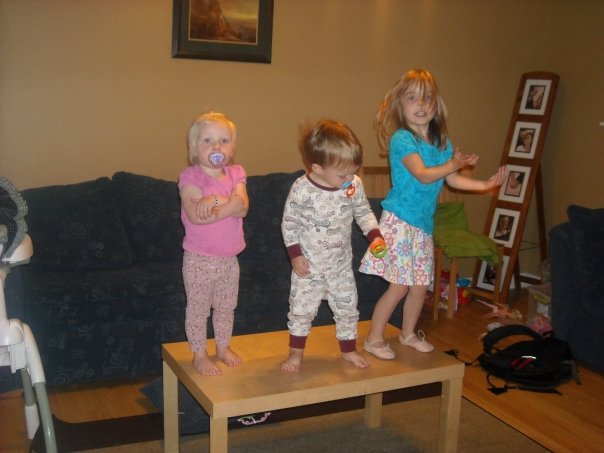 I love being a YES mom and encouraging and supporting their imagination and ultimately their experiences. It is not always easy but I honestly believe it’s always worth it:

Playing in the nearby lake – ugh, that’s hard….you’ll get wet. But wait a minute….So what? Go play!!! * Bubbles in the tub = FUN! * Painting your body with cream cheese icing? Well, I didn’t see it happen but I also chose not to make it a huge deal…gross but really didn’t need to be wrong or bad * Decorating cookies their own way. Icing anyone?! haha * Collecting moths – come on moms, grab a jar you never want to use for anything ever again and collect those critters.

Obviously the boy has been creating on his face since the start! haha – and even when makeup was nowhere to be found, ketchup {photo 2} did the trick. This kid cracks me up! {Photo 4 was his sister’s handiwork lol}

Want to pretend you’re going to the bathroom on the Costco toilets? Initial reaction is that it’s inappropriate {I know I’m not the only one}, but also what a fun and funny photo op! Embraced it and loved the laughs we had * Sometimes you just gotta let them dress themselves! * Not everyone needs to have a pinterest worthy jack-o-lantern. * Skateboarding through the house? If you have the room, why the heck not?! 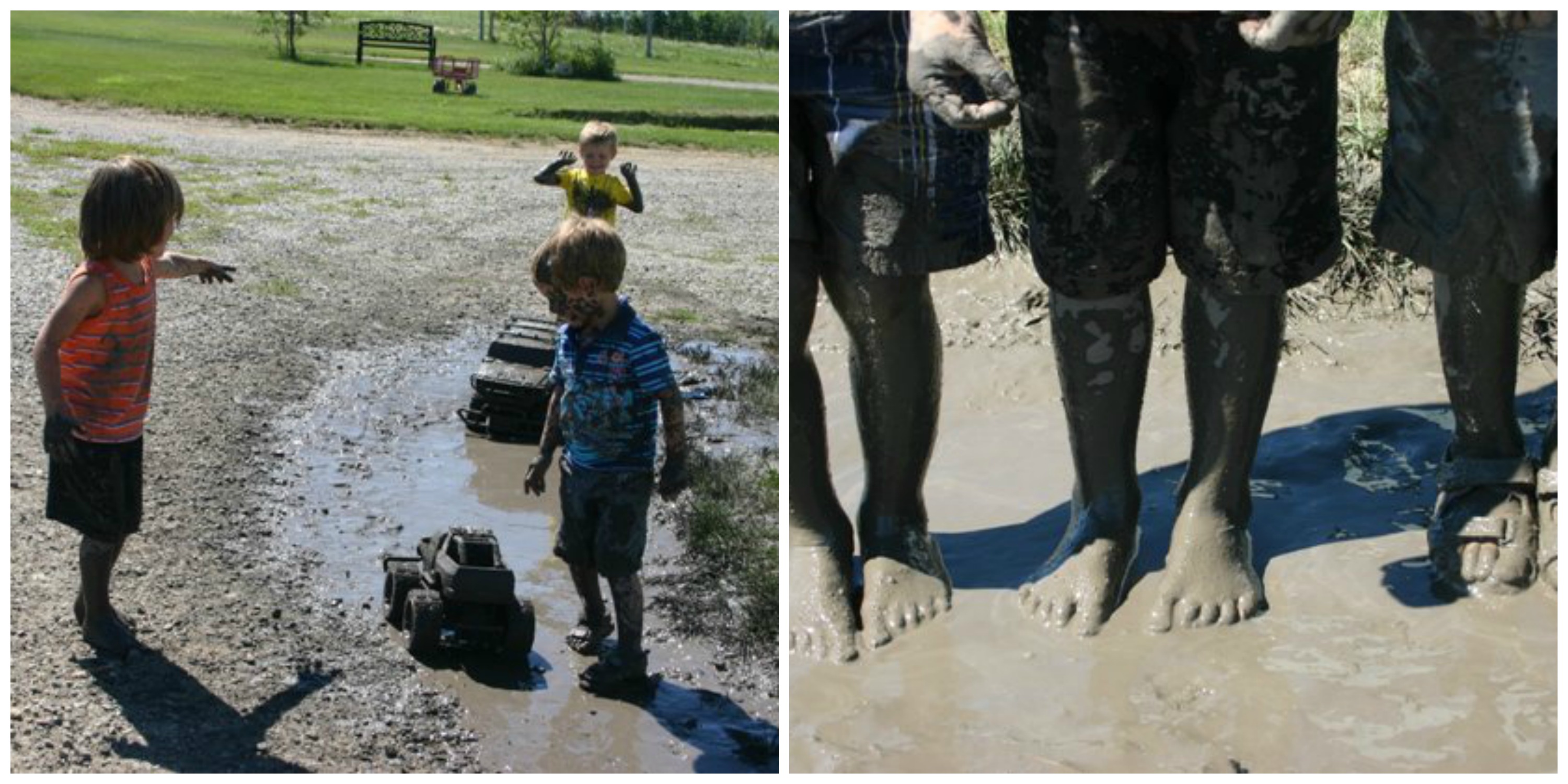 I can’t say all of us moms were immediately thrilled with the situation, but by the time we noticed it we realized it wasn’t going to get worse, so we made the most of it! These boys had a BLAST mud bogging. Their clothes never quite recovered but you know – they are JUST clothes. The memories they made together were absolutely worth the forever stained shirt and shorts, that then became the perfect camping clothes.

Want to have a bath with your friend? Meh, throw on swimsuits and party it up! * Brooklyn wanted to water the tree. Sometimes I didn’t want to get things out to accommodate her requests but I also had to learn that sometimes it’s just not about me. Plus I love her swimsuit and boots – screamed sports illustrated lol * Jonah is such a ham….another possibly inappropriate moment for many but it was just really stinkin’ funny! * Parking lot party trains? Oh this one was haaaaaaard for me. It was at the end of the day, I was tired and a bit cranky and the kids’ obnoxious level was at a million percent. BUT they were having fun….so I walked and chose to embrace it – and snap the photo of course. But I really had to decide in that moment to let it be a memory instead of trying to correct a totally not wrong at all moment.

Playing in the Captain’s shirts was the thing to do for a while. I know he didn’t love it but also just learned to embrace it. They had fun, looked adorable and not once did a shirt get ruined. * Ah yes, body art. hahahaha – don’t stress, it does eventually come off! * Mom, I want to do your hair! – I seriously drove over to my parents’ for dinner like this. Just following orders! * Want 4 pieces of Jell-O? Meh, why the heck not? Yummy snack and I did make it to eat, so dig in! * Inside doll stroller races – haha….Jonah thought this was the best thing ever!

I promise you this – not every adjustment will be immediate or simple, but every memory that results will absolutely fill your heart and make your days more fun. Plus, your time together will be filled with much more ease.

Are you a Yes mom? I’d love to hear your experiences – use the hashtag #beayesmom on Instagram and tag me @theseareyourdays so I can see your moments!