Don’t ASSume Anything {A Life Lesson} 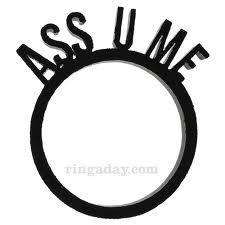 One of my closest friends had her first baby in the wee hours Monday morning – a sweet little boy. And we are all SO excited! He was just over 9lbs of delicious perfection – or so I’ve been told. I haven’t seen him yet.

A few days before he was born, my friend came over for some good ol’ girl chat. Along with another friend, we chatted about all things pregnancy and childbirth related…newborn stages, etc. And how, very quickly all dignity is lost and, particularly with c-sections {I’ve had two} your spouse is immediately put in the position of doing things you NEVER would have wanted….and yet strangely, in those moments you wouldn’t want anyone else to be the one helping. Funny how that happens.

We discussed visits after baby is born – both our other friend and I are *the more the merrier* type, while another mutual friend didn’t want anyone other than family until she was home.  My *almost due* friend was somewhere in between – not sure she would want a huge party at the hospital. It’s not my way but I can understand that and was glad to have the conversation so I could know – as is typical with many of my friends and family, I’d likely have just showed up within the first day to take in some that magical newborn goodness.

They are so perfect when they are brand new.

I asked if she would let me come to the hospital – wanting both to make sure I had a good understanding of her wishes and wondering if I was someone who was sort of an *exception to the rule*. She agreed that if she felt up to it, I would indeed, be welcome. *yay*

I think I just assumed {there’s that word} that would be the case. And that soon after this little muffin was born I would be able to snuggle and love on him – and of course introduce him to his *Auntie Hailey* and share the new mom fun with my dear friend!  🙂

Upon receiving the text of his arrival Jonah and I promptly took a trip to Walmart to get him another gift – we had already contributed to a photo shoot {maternity and newborn} and gotten something for the baby shower we helped host – but I mean….HE’S HERE!  It warranted another little something and we are THAT excited! But because labour and delivery didn’t go quite as planned and she ended up with a C-section, along with some other things , she was left feeling less than interested in having hospital company. It’s a little strange territory for me, but I understand  and can respect it. So each day came with anxious anticipation of being able to go see him….making sure my days events were easily rearranged for whatever time worked. But each day was met with the request to put it off longer because she was not feeling up to it.

It’s been 5 days and still I have not been able to spend time with them and have no idea when it will happen. I’m trying so desperately to be patient and understanding, but it’s difficult for me to figure out. And I feel like that beginning excitement is dwindling…not because I love him any less  {oh that will never be an issue} but because the newness is wearing off. And now, my days aren’t as easily rearranged – I watched a friend’s daughter for two days and we are now on summer holidays so we’ve packed them with fun. PLUS, I wanted to go over without the kids so it’s a bit less chaotic in the beginning. So that eliminates a lot of the day lol 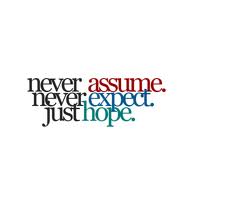 And my girly brain {annoying sometimes isn’t it?!} started kicking in and I was starting to feel offended. I understand not feeling well and not feeling up for company…not wanting a bunch of people stopping by, etc. I guess I just ASSUMED I wasn’t *company*…feeling like somehow our friendship placed me closer than that? I consider myself to be a really *go with the flow* kind of girl….not easily ruffled and easily adaptable to change, etc. I don’t go through life with a bunch of expectations – and really just sort of move along my merry way with ease. But every once in a while something comes out of nowhere and I find myself in *crazy girl* territory.

This is clearly one of those times. And I hate it…..One of my dearest friends has just had her first baby – via major surgery….and I’ve found a way to make it about ME{even though my reasons for wanting to see them are for her and the baby}! But, in the process I’ve learned a few valuable lessons {after chatting with her on the phone and going through the whole scenario….and making plans to see her and the wee one as soon as possible – hopefully tonight}:

*I’m not as easily adaptable when I have an expectation

*It’s true what they say about *ASSuming*

*Just because I regard my close friends like family {and like having them around nearly all the time}, doesn’t mean they do….and won’t change the fact that I do

and, that no matter what….I’m going to get to love and canoodle this wee one and be there for our friends….whether it’s a week or a month {or more} later.

Have you ever had a situation that put you out of your element? What did you learn and what was your turning point?

It’s My Birthday…My Age and My Theory