A little piece of me

End of the day announcements caught my attention one Friday on my way out of school in grade 12. I didn’t ever really pay that much attention to them but I immediately stopped and listened for EVERY detail. **Volunteers are needed in the summer for the Kids Cancer Camp** – I was hooked….I tend to be a procrastinator, but I was on top of this one. I didn’t want to miss this opportunity. I knew immediately it was where I wanted to be, something I wanted to do, and in so many ways something I NEEDED. I couldn’t have been more right. I sent in my application, was approved and set out for the best week of my life. It was phenomenal – These kids – some with cancer, some survivors, and some siblings of both survivors and victims – laughing and smiling and being able to forget for even just a moment what their reality was. The week was packed full of fun – arts and crafts, games outside, and even a teepee sleepover on the last night. This night has a very special place in my heart and in fact, just thinking of it now I’m getting emotional.

While I LOVED all of the kids I met there, there were two sweet girls in particular who I felt a special bond with. Best friends as a result of their lives with Cancer (one with Neuroblastoma and the other Wilm’s Tumour)  – Shelby, barely 5 at the time and Nicole, 7 – much too young to experience all that they had, yet their zest for life was infectious. I landed the best spot in the teepee – right between the two of them 😀 I even got to be Shelby’s *pretend mommy* as she was missing her own so much. Talk about a Proud moment!

We had a fun picnic lunch with everyone after the campout and said our goodbyes. Knowing this was something I planned to do every summer, I couldn’t shake the feeling that some of these kids likely wouldn’t be around the following year. Devastating and Motivating  – I got talking with Shelby’s mom (Maria) and Nicole’s mom (Donna) and found out both girls would be in the Cancer Clinic that week for treatment. So I arranged to come and visit.

Again, no way was I letting this opportunity pass me by. These children touched my heart, my soul…and they are forever etched within my being. Many memories were made in the clinic of the (old) Alberta Children’s hospital and many more friends were met. It’s an incredible network there, one I felt honoured to be welcomed into. As a result of these visits and my indecisiveness with my future (thank goodness for that) and Maria’s desire and need for someone to watch Shelby while she got some things done, I became Shelby’s nanny. Seriously – how lucky am I! I can’t tell you the amount of times I’ve seen the Spice Girls Movie, or how many times we had *meat, cheese, and crackers* for lunch (her favorite), or how many *chocolate milky bubbas* I made her – but even as I sit here I can’t help but think, *if I could just do it one more time*. No matter how much time we’re given it never seems like enough. Though Shelby’s Cancer (wilm’s tumour) holds a 95% cure rate, and despite her incredible determination (giving a fight like no other), she earned her angel wings that October (1998). No matter how inevitable, you never really believe that day will ever come. As a result of my hospital visits with Shelby and Nicole, I became extremely close friends with a guy named, Josh. He had just had a unique surgery in which his leg was amputated (thigh) and then his calf (and foot) were reattached backwards to allow his heel to act as a knee in his prosthetic. He thought it looked wierd, and it did….but I was PROUD to be his friend.

The year after Shelby passed, and on what would have been her 6th birthday, I was able to shave my head and donate the proceeds to the Kids Cancer Care Foundation of Alberta. Josh had just had surgery and was unable to leave the hospital, so we arranged to have it done there! Some other kids I had met through the camp and seen while at the hospital also came to show their support. As did my best friend, Jenny and her now husband, Luke (it was the first time I met him. lol). It was incredible and a day I’ll never forget.  Shelby’s brother and sister helped Nicole and Jenny cut off my pony tails and shave my head. And if you’re wondering, I LOVED being bald. 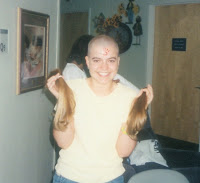 Later that year, I was given the opportunity of a lifetime when Josh’s parents offered me to live with them for what would be the last few months of his life. I can never thank them enough –  that time together, the amazing opportunity to share those special moments with a dear friend and be included on the *inside* – it has forever changed me.

We shared some pretty special times – opening night at the Pokemon movie (oh yes we did), making dinner for the family , driving the train across the lethbridge bridge on his birthday, just to name a few – all of which I think of daily. My dear sweet Nicole – Shelby’s best friend – whom I ADORED and took pride in knowing (they used to fight over my lap at the hospital…lol) also earned her angel wings, years later shortly before my wedding (2002). I do not choose to live with regret, however hers is a story I wish I had more of. I missed a lot – and not because I didn’t have the time, or because I was so involved in other things (although i was busy)….and certainly not because she didn’t matter (oh did she matter)….but for whatever reason, I didn’t MAKE the time. And perhaps that is what hurts me most of all. Because she did matter…and I missed out.

These three were not the only ones – there were many children whose lives touched mine in ways I can never explain. I’ve seen these faces….the smiles, the tears, the triumphs, and even what feels like failures. I know the laughs, the seemingly insignificant details that become milestones, the rides down the hall on iv poles (which initially had me freaked out – man I was so uptight. lol). I felt the sorrow, the anger, the loss….and I know what it’s like to look into a mother’s eyes as she watches her child fight for their life. And the stories….One little girl, Morgan told her mother one day that she *LOVED her feeding tube…* – *Because then she could eat AND play at the SAME time!*…now THAT’s positive thinking!

I am nothing short of blessed to have been a witness to the magic. And forever grateful for being welcomed with open arms.