I have a few items on my sewing list this summer, so I figured I had better get started. As we have been spending our days at the beach, I figured starting with a cover up would be the way to go.

I made her a couple in 2010 and because she’s so little she was able to get two summers out of them. But this year she needed a new one. 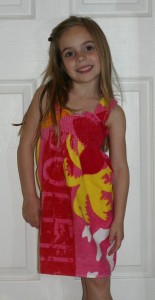 I walked by this Ocean Pacific towel twice in Walmart this past week and finally bit the bullet. It was $15 – a little more than I prefer to spend, but I LOVED the colours and had to have it. Besides $15 for a swim cover up really isn’t bad – especially when she’ll likely get 2 summers out of it again. 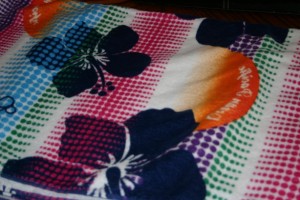 I love the hibiscus flowers and the bright colours!

The Swim Cover Up Pattern at From An Igloo is a great project for the beginner sewer. It has a decent amount of room for error {love that}, includes basic sewing techniques {straight and zigzag stitches}, and also teaches a new one {shirring…was new to me the first time} which is easy to figure out and also has room for error. 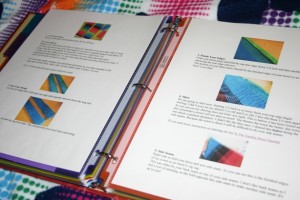 I love having my patterns neatly organized in a binder – a great idea I copied from a cousin!

Having made them before I was able to zip through a few of the steps, which made for a fun little evening project. 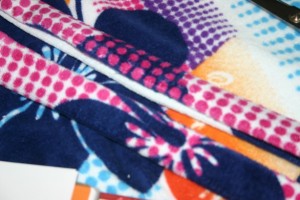 I do the straps a little differently than the instructions show – I don’t like sewing them wrong sides together and then flipping them inside out. Towel material is a little tricky for that and turning a *tube* of fabric inside out is FRUSTRATING! And my hands cramp, so I simply fold it in half length-wise – how do I explain this? – tucking in the raw edges to make a nice seam. Then I simply sew a straight stitch all the way down. Towels are great for hiding stitching! 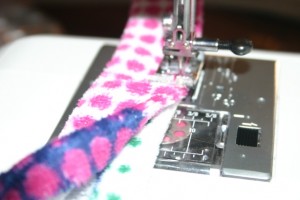 I know the photo is super bright, but here I am sewing the strap. See how it’s folded in on itself?

And after about an hour total for me – and a million try ons for Brooklyn, I was done and THRILLED with how it turned out. Good thing too because we’re heading to the beach again tomorrow! 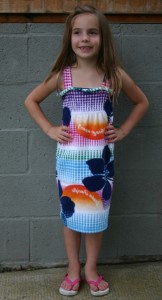 So glad I bought that towel

Only problem now is I want to make a few! Walmart has some great, plain striped towels for $5 each that I might grab – if you want to try this out, I recommend starting with an inexpensive towel to ease the pressure on yourself. 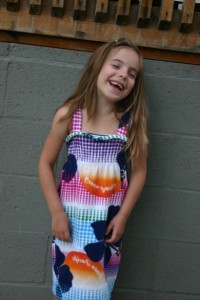 I sure love her

The Library *A Date With My Girl Part I*