The main reason we found ourselves back in Roseville was to take the kids to Santa’s Secret Adventure in Sacramento. We had heard about it from some friends and thought it would be a really fun (and festive) activity. Plus, with the promise of photos with Santa, for me it eliminated needing to do it when we got home. LOL 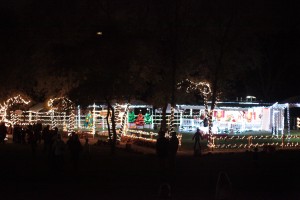 A little dark, but still fun 🙂

The kids were SO excited to see Santa and the Elves – and we were excited to see their little faces light up. The kids were able to wrap presents with the elves (though strangely, shortly after we arrived they ran out of wrapping paper…), sit by the camp fire, have hot chocolate and cookies, ride ponies, ride in horse drawn carriages, and of course get photos with Santa and Mrs. Claus.

Wrapping a present - presents were donated to toys for tots

The kids enjoyed it and were sad to leave at the end. I’m happy that we did it, though if you want the truth, I actually think the price was too high. It was $38 for each child, though I was grateful adults were only an additional $10. But even still…I think both my cousin and I had pretty high expectations, and while we’re glad we did it, I can’t honestly say we’d do it again. Here’s why:

The website gives an amazing magical feeling…as though, upon arrival, you will be whisked away into a magical Christmas wonderland, singing and reading stories around the campfire with the elves, wrapping presents with them (as mentioned – they ran out of it shortly after we arrived), petting and feeding the animals in Santa’s petting zoo, and more. When you read the description online it’s easy to get caught up. 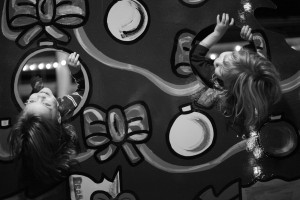 Arriving at the check-in gate, we were given a map of the grounds and told of the things we could do. And then we were on our own. Being Canadian, snow is part of the magic (however much we don’t love the real stuff), so it took away from the experience to have bare ground. I think we sort of expected to see or experience the hustle and bustle of elves in anxious preparation and anticipation of Christmas….making sure everyone was being well cared for and bringing magic to the experience. But we hardly saw any, and when we sat around the campfire there wasn’t an elf to be found. No campfire songs, no Christmas story…so we just sat and warmed up for a minute, and went on our way. 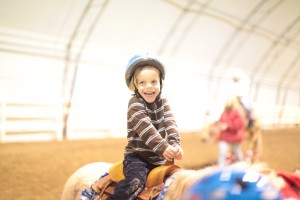 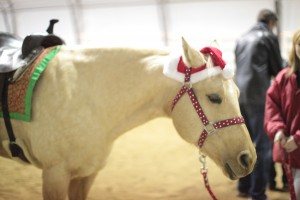 Riding the horses was a HUGE hit for the kids and it was difficult to pull them away. The horses were all decorated with festive touches, which the kids LOVED. They definitely looked the part! The petting zoo wasn’t overly exciting…in fact the one Alpaca was rather grumpy and we were told by the Elves that were there to be careful. If I’m being honest, having a grumpy or moody animal in a children’s petting zoo seems like a bad idea. That being said, we were fine and nothing happened, though the kids were ready to move on quickly. 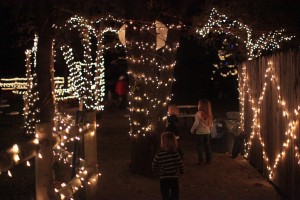 On the way to the petting zoo

Santa and Mrs. Claus were GREAT! The kids LOVED seeing them and having their photos taken (you can take your own or simply purchase copies online afterwards…there is an elf there taking them!).

Not wanting to end the experience too quickly, particularly with having spent so much, we went for some hot chocolate and cookies. The kids loved it, but the hot chocolate was incredibly hot so it took a while before they could actually drink it. I’m not really sure how exactly you’d combat that….last thing you want to serve is cold hot chocolate…. 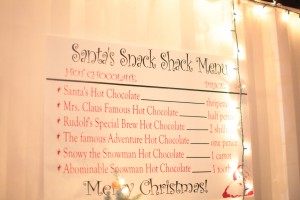 We rode the horse drawn carriages several times, and sang some carols together to try and bump up the spirit (it worked….our driver was awesome and joined in and we shared lots of laughs)! We did have a bit of a scare at one point when our boys came within an inch of being run down by one of the carriages…the situation was relayed to a worker in the hopes that either the path would be better lit in the future OR an entirely separate path would be made. It really was a close call and had our hearts beating pretty fast. 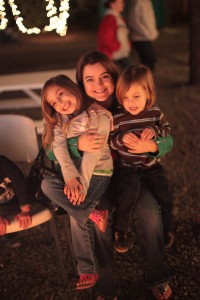 Like I said, we were glad we went…and the kids had fun…but we left feeling like we were missing something. There was a magic that wasn’t there…and I know both my cousin and I would LOVE to get our hands on that place and give it the boost we felt like it needed. It has some incredible potential, and with some changes and improvements would be more than worth the price. It was good…but it really could have been AWESOME!!!!

At this point I recommend it lightly…as long as you aren’t going into it with the expectation we had, and are just looking for an easygoing and fun activity to do in the lead up to Christmas – it is certainly a nice way to spend an evening. But as for the magical experience the website alludes to – I say it definitely falls short. Which bugs me actually, I had such high hopes for this winter wonderland and had every hope of LOVING it!

Crazy Dog Tshirts – One more for the men