Before leaving Yosemite Lakes Park we had to decide where we were heading. We considered doing the Disneyland run and heading down to Anaheim but a few things had us reconsider and choose a different route. We decided upon heading out to the coast and checking out Monterey and Santa Cruz instead and went to work booking our hotels. Using Hotwire we found a list of hotels in the Monterey area and were quickly drawn to the cheapest option at just $30 per night. Now we realized it wasn’t going to be anything spectacular, but we also loved the idea of saving a few bucks. So after debating for a few minutes we went for it, hoping we hadn’t made a lapse in judgement. Desperately hoping. lol 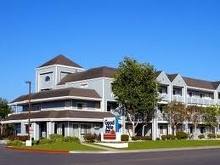 The hotel, or should I say Inn, from the outside is alright….It didn’t seem to be in a rough neighbourhood or anything that we felt uncomfortable with, though I naturally was a little worried about the items we left in the vehicle overnight but that’s just because I’m like that. In addition, I tend to get a little leary of hotels/inns, that only have outside entry’s to the rooms. It didn’t really feel the safest, but I can’t honestly say that had anything to do with the hotel as much as it did my own paranoia’s and judgements based on the $30/night price. You can check out more photos HERE.

We slept well, nothing was stolen, but I’m sure we could have done without the little colony of ants taking over our bathroom. *shudder* We notified the front desk as we checked out and they promised to get maintenance on the job right away. I hope they did 😉 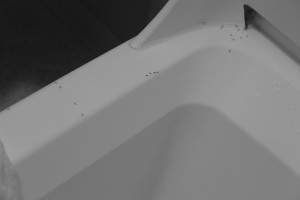 There was also a $5 per night internet usage fee, though it’s advertised as free, which was a little annoying, though not a huge deal.

It really wasn’t a bad experience, and the front desk staff was friendly, and aside from the ants, the room was clean, but I think – at least for trips where it’s just us, we won’t likely be taking any more chances with the $30 price range. But who knows….sometimes it’s fun to see what you get. And I just know that on trips with my husband, this is exactly where he’d want to stay…ants and all! (he’s just like his dad)