Despite numerous google searches, I totally missed it and didn’t know Malibu was in heat. #rookie

But she was – and Axel did not miss his chance(s). Consequently she became large with  puppies. We were coming home from the condo on her 8 week due date and our friend texted to say she was showing labour signs. So we prayed we’d make it in time.

And we did. Because she went to 9 weeks.

I came home from work Thursday around 1pm and felt like something was starting. Nothing major, I just felt like it would be worthwhile to keep an eye on her. I put Axel in the kennel because he was ANNOYING to me – wanting to rob her of any attention and snag it for himself. lol Within half an hour I could see a clear improvement in her relaxation – and a clear progression in her labour. I got the kids to bed and settled in because I was certain that this was the night.

A photo with Malibu before going to bed.

Because I’m cruel and it makes me laugh

Nesting, Pacing, Panting, etc. She was also incredibly snuggly and calm, which surprised me for being so young. Miss Malibu laboured like a champ, and as a result, we got to share some amazing bonding time.

Just breathing her way through

Trying to get some rest

No doubt vowing never to let Axel near her again

I sure love this pooch

I stayed up with her all night and into the morning. At about 3am I was feeling sleepy and chilled so I went into the house and watched from the table. Malibu was restless by this point, but not quite settling in to deliver. I dozed at the table off and on, desperate not to fall asleep for fear I would end up missing the whole thing. But somehow I looked up at 5:15am, just in time to watch her birth pup #1. A black male. She was a little slow to use her mothering instincts, so I helped out to ensure all was well, and she took over from there.

Within an hour she had birthed 6 puppies – 1 black male, 2 chocolate male, and 2 chocolate female. A cute little family indeed, and how many I had hoped she would have. I didn’t want her having a large litter (Axel is one of 13, 11 surviving) because it was her first AND she is just over a year.

Malibu and her sweet little girl

But 6 hours later, it all changed.

I was on my way out to a school function and went outside just to check on her. My friend, who stopped in for a bit when she grabbed the kids for school had suspected there was maybe 1 or 2 other pups (you could feel at least one still), so I was a little nervous to leave her. When I went outside, Malibu was noticably concerned….panicked almost….pacing quickly and searching. I worried there was something wrong with the pup and she knew it, so I prepared myself for a stillbirth. But the truth is, I had thrown away the torn up birthing blanket after puppy #6 and I think she was simply looking for HER birthing place. #oops

I never did make it to the school function, and I’m glad I stayed as I had to help deliver #11 who got stuck head out. Malibu was just so tired by then that even her biggest pushes just could not do it.

She has been amazing. We’ve had lots of company and she’s been perfect. There have been a few times she seemed a bit agitated while trying to get comfortable and probably still adjusting…and the times she closes herself off and you know she’s just sick of having ALL these puppies sucking on her every minute of the day. But she has taken to mothering and is calmer than I’ve ever seen since we got her a year ago. 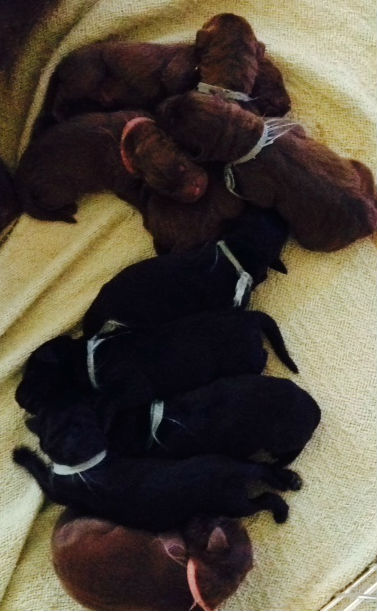 If you follow on Instagram you will know that we did lose two puppies – #10 (chocolate girl) and #11 (black, who originally was labelled as a boy, but turned out to be a girl…I’m blaming sleep deprivation). And as expected, it was devastating and still is. But we are moving forward and making sure the 9 remaining puppies are as healthy as can be.

And of course, I’ll be watching her future heat cycles like a hawk…

This was our weekend *Wordless Wednesday*