The Calgary Zoo {The Bad}

Okay, the truth is – all in all, I LOVE the Zoo. So the experience all around is great. Seeing animals we wouldn’t likely see otherwise is always a special treat, particularly when they indulge us and do more than just lay around. lol

But I have to admit, there were a few {only a few} things that I noticed that sort of fall under *The Bad* cateogory {Read about The Good HERE}. Wonder what they are? 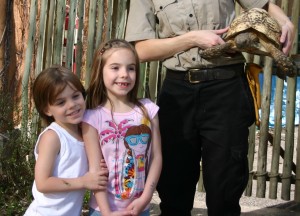 Getting their photo with this tortoise {I think} certainly doesn't qualify as a bad thing!

First of all, while I know they have to be there….the Canadian Wilds section of the zoo seems kind of silly to me. I mean, it has quite possibly the most boring animals {ie animals you could see driving through the mountains here…mostly} AND the most walking. I don’t think I even took one photo….oh no wait, I did….. 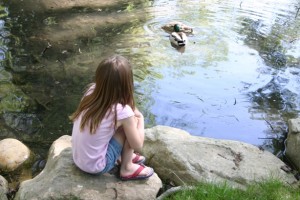 Checking out the ducks....the ducks! 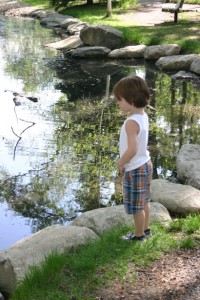 {truth is, they love ALL animals!}

Okay, it’s not all their fault…I made sure we went through this section rather quickly, making an executive decision that there were more exciting animals to see {Penguin Plunge anyone?}. I know, I know….like I said, these Canadian Wilds animals have their place. It does make sense…Though I don’t know that other zoos do the same thing? Hmmm….

Anyways, next up. Mr. Giraffe…{whom I love} 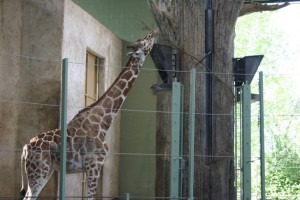 Hmmm....what shall I eat for lunch today?

So let me get this straight? We uproot a beautiful giraffe from it’s home in the African Savannah {is that what it’s called?}, lush with greenery and tall trees with an abundance to eat, so it can be stared at and watched day after day….and given ONE  measly branch to eat the leaves from? ON A MECHANICAL TREE???

Seriously something is wrong with this to me. Why on earth can we not make a setting to GROW plants and shrubs {even simply placed high up} to really recreate {as best as possible} the origin of these beautiful animals? If they are used to hot and humid, and the plants need the same to thrive, then make it hot and humid. How much time do us zoo goers stay in each section anyways? Being there and knowing it is as similar as possible to their natural climate would be awesome. PLUS – it’s the weather we’d encounter on a real safari anyways…and get this poor giraffe some greenery, real greenery…real trees….to look at, walk through, and eat. I know zoos are expensive and the upkeep must be rather intense to begin with. But I sort of feel like it comes with the territory. If we are going to prove spaces for animals NOT native to the local climate, I think it’s our duty to truly recreate the surroundings as best we can. For me {and the giraffe, I imagine}, this just didn’t quite cut it. 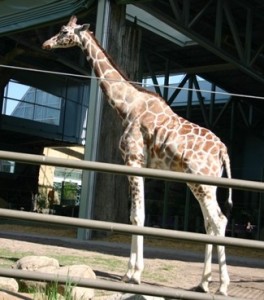 Those leaves must pack some serious calories....check out his back rolls 😉

Let’s move on to Mr. Hippopotamus, shall we? Another animal I adore….now I wouldn’t want to be near a set of Hippo jaws *eep* but I certainly love to see them. There is just something about them… 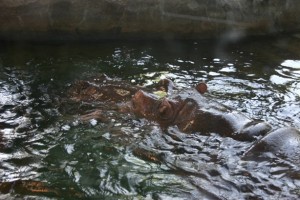 After waiting for a while, leaving and coming back, this *little* hippo finally came up!

I wish I had a photo of the hippo enclosure in its entirety, but I must not have had *blogging* on the brain at the time. lol The bottom line is this – it’s TINY! And, hippos are, obviously, not. They need room to swim and bask as much as they would in the wild, in a nice large *swamp like* body of water with a fabulous patch of land…..heated to perfection, Africa-style. lol I know the point is to be able to see the animals while at the zoo, and in some ways offering too large an enclosure could damper that….but I definitely think there are ways to do it without making it too difficult.{The greenery and shrubbery situation applies here as well} 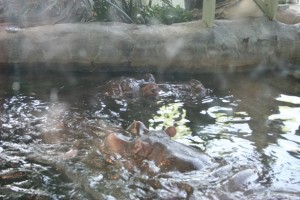 And finally, both of them!

And last but not least, The Penguin Plunge. While we LOVED seeing the penguins –  they were really active and fun to watch – there was one thing I noticed that I thought was kinda strange….and silly. 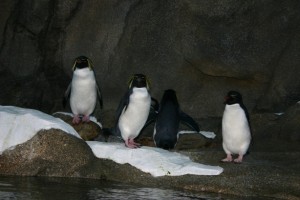 Again with the climate thing….I realize we maybe can’t have this type of an enclosure that isn’t concrete based….or all snow…but surely we can do better than concrete painted white to resemble snow? So couldn’t there be small patches of ice in the water along with some real snow on the concrete to better resemble their natural habitat? And again – if that means the temperature in the enclosure needs to be even a bit colder to make that happen, then so be it {though I tend to think something could be done to help the concrete facilitate it instead}. The penguins do have the option of heading out to bask in the sun should they so choose {and some did} 🙂 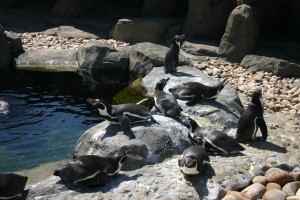 Soaking up the rays

It’s quite possible I’m asking too much….but I think it would be pretty awesome if there was a way to make these changes. What do you think? Am I right on the money or grasping at straws?

**Disclosure: I visited The Calgary Zoo on my own dime during a recent trip to Calgary.

None of my visit nor my resulting blog posts have been compensated in any way.

All in all I LOVE the zoo and the kids and I had a GREAT time!**

Why I Went Back To Work