0 In Giveaways and Reviews/ Personal/ VACAY!!

I have been anxious to blog this trip and am finally getting my act together. Thankfully I learned from my California Trip and took notes throughout the week so it’s not as difficult to remember the details.

We have never been away from our kids…in fact, the first time our daughter was ever a night without us was when we were in the hospital having our son – nearly 4 years ago (I KNOW!). And since then, we spent two nights last year away (in Canmore, Alberta) and that is it. Truth is, while we love the idea of having *us* time, we find ourselves wanting to share the experiences with our kids. Besides, I figure we’ll have lots of years once they are grown, to travel solo…

But this time we bit the bullet. I finally let go of my anxiety enough and we booked a vacay with some friends of ours. We had been watching for months and waiting for specials, etc….and finally decided on our destination and dates: Mayan Riviera, Mexico in April 2011, booked through AMA Travel.

One of the perks (aside, of course, from going to Mexico) was that our flights were straight from Lethbridge – a small pit stop in Calgary – and straight through to the Cancun Airport. PARADISE as I like to call it (Cancun, not the airport. lol).

We flew Air Canada….I flew often throughout my life (pre-marriage) and pretty much had good experiences all around. This time was no different, though lots has changed since I last flew 8 years ago for our honeymoon (seriously, unacceptable…that must be changed!). 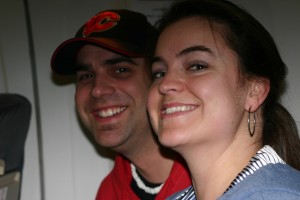 Not our finest photo, but it was really early!

On the plus side:

Our flight was delayed (that wasn’t so fun…buuuut we didn’t have our kids with us to worry about so we were feeling GREAT! lol) and the airline staff were thoughtful enough to bring out complimentary drinks and pretzels to everyone waiting (though if I’m allowed to be picky, I really dislike pretzels…just sayin’). It was a great idea and really helped break up the wait – plus I know the parents who did have children with them were SO grateful as well.

The flight staff were friendly and helpful.

And, um, we got there safely (always a plus!)

The plain was REALLY old…REALLY old. There were a few times we made some uncomfortable jokes about going down…it was not the kind of plain that created a high amount of trust in us.

The tv feature was not working in First Class (is it wrong that I giggled a little?). I suppose not the end of the world, but considering domestic first class flights really have few perks, it’s a real bummer when one of them is out of commission. I would imagine – I’ve never flown first class (though have heard that to Europe it’s out of this world).

The movies weren’t all that great…The Tourist and another one I can’t remember. Though I realize it’s difficult to please everyone – I had sort of thought they would show a more kid friendly movie considering how many we had on our flight (if you’re cringing for us, don’t…the kids were AMAZING…we never heard any of them the entire flight!).

Okay and, what’s up with the new *paid* meals situation? Am I the only one that thinks it’s crazy…despite the fact that the prices are reasonable – I’m the kind of girl that likes to pay a price and not have to worry about extras (which is probably why this holiday had me SOLD on the *all inclusive* idea). I much preferred when meals were included.

All in all…the flight was fine…nothing overly amazing but also, nothing overly disappointing. We were taken care of and most of all, safe. I would be willing to fly Air Canada again in the future, though I look forward to doing comparative reviews in the future. I was seriously *Made to Holiday* so,

There is magic in…

Letting It Go {My struggle with #anxiety}