0 In Tales From an Unfiltered Parent

Recently I’ve seen several articles suggesting we shouldn’t be talking to our kids, specifically our daughters about their bodies. The headline of one in particular is something like “How to talk to your daughter about her body. Step one: Don’t talk to her about her body”. 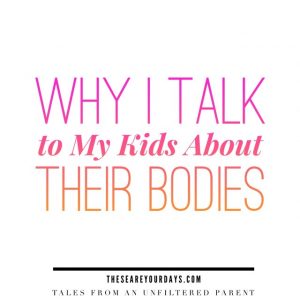 And I understand that we don’t want to encourage body negativity or unhealthy fixation, but I don’t agree with avoiding the topic as the best way to do this. In fact, I’m quite the opposite.

I don’t believe that talking about a thing inherently creates that thing. Now, if we’re talking negatively about our bodies or heaven forbid, our children’s bodies well, shame on us because there truly is potential for great damage. But aside from that, I really believe that realistic body talk is healthy and valuable, and in many ways even essential. And valid for everyone, not just our daughters.

We can want to change or improve things without having a negative attitude about it. 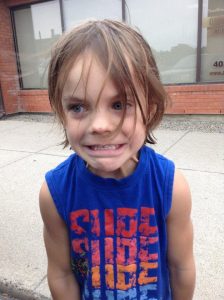 Haha, this photo of him posing Hulk style always cracks me up. But look at those arms!!

So for example, my son who has always been naturally built – complete with six pack and arm definition, has found himself at the age of eleven with a bit more pre-adolescent chub than he’d like. And it bothers him. Why do I know this? Because he’s told me. He’s expressed his insecurities about it in general and in certain situations, and how much he would like to look how he used to. If I was unwilling to talk about these things, I might dismiss his feelings and concerns by simply saying “you’re fine and perfect the way you are” blah blah blah But honestly, that does nothing….how much does someone’s opinion on how you look actually impact how you feel internally? So instead, I use it as a conversation starter and teaching moment, which has led to some really great discussions.

What do I say? First, I validate his feelings. I do not agree with his using the word fat because he’s not fat – and actually not fat, not just his mama saying he’s not fat – but I tell him I understand his feelings. And then we talk about what bothers him specifically. I also tell him that if it’s something that genuinely bothers him and enough that he would actually like to improve, there are ways to do so such as getting more sleep, being more active, and watching quantities and types of food. To be clear, I refuse to food shame so there is no expectation for myself or my children to stay away from certain things. However, when I noticed a period where he was STARVING after school and in true gamer style would grab anything that was ready to eat which sometimes meant pounding down 4 small bags of chips in a row plus a handful of other snack items, I knew it was worth having some real conversations about. Why? Because NOBODY’S body can manage FOUR bags of chips. This is not about him specifically; this is a food lesson for us all. I also acknowledge that a lot of that starts with me making sure I’m providing good choices and making them available in that window of time. So I started making dinner right after we’d get home and he would have a few snacks while I cooked – a veggie tray once again became a staple and if he wanted a bag of chips, he had one. ONE.

And you know, it’s made a huge difference in eating habits and as an added bonus, he’s recently noticed a pair of pants fitting better which, can I just say has pretty much skyrocketed his self image. He still has insecurities and would like to improve more but he’s so damn proud of himself and thrilled with this change, and that is huge. I couldn’t tell you what he weighs and I don’t want to know, nor do I want him to know (we don’t even have a scale in the house). The truth is the fit of clothing is heaps more valuable in gauging where you’re at. It’s so much more useful than a number on the scale.

And although my daughter does not struggle with any weight or body concerns, we also talk openly about hers and how certain clothes compliment her shape, etc. Dressing for our specific bodies is huge for self image, though if I’m being honest, EVERYTHING looks good on her (yes, she’s one of those haha). But seriously, when we feel confident in how we look, it’s easier to feel confident in who we are. 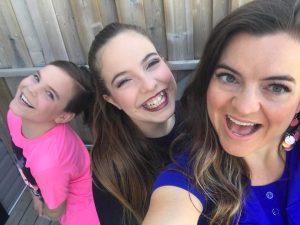 Another thing we talk about often is how beautiful people are with all sorts of different body shapes and sizes, and that it’s futile to want to look like someone else. I am short and have curves. It would be unreasonable for me to wish to look like someone who is tall and lean. I will never be tall, no matter what. And my body is not built to be the same kind of lean or without hips or boobs. I have hips and boobs, and meat on my butt and thighs. Now the truth is I love my shape and always have EVEN THOUGH there are things I would like to improve. Over the past year, I’ve put a bit more weight on than I’d like and now it’s starting to bother me especially because my clothes are not fitting the way they used to. So when my son brings up his concerns, instead of dismissing them, I share my personal struggles too. The great thing is, I can do that AND have body confidence and a positive self image. Plus he feels heard and validated and learns that you can have insecurities and still be confident at the same time. And also that we have the power to change most things.

All this is to say I think we SHOULD talk about our bodies. Bodies are beautiful and incredible and should be loved, even when there are things about them we don’t totally love.

________________________________________________________________________________
Tales from an Unfiltered Parent is my attempt to inspire others to have open conversations with their children. I mean it when I say nothing is off limits, and my children and I have had very honest and raw discussions on almost every topic imaginable. You don’t have to agree with my stance or explanations, but what I hope is that it will at least give you a starting point with which to create the same open foundation within your own family. I am a strong believer that knowledge is power and that when we give our kids our trust and honesty, they are better equipped to navigate life and find more ways to flourish while doing so.
Have a topic you want discussed?

Send me an email with subject ‘Unfiltered Parent’ to theseareyourdays@gmail.com

Consent Isn’t Just About Sex | Tales from an Unfiltered Parent