There Is No Closet Here

I heard the chatter, the whispers, the suspicions. But I never understood it.

I was maybe about 14 and we were putting together a play with our youth group. We all participated but there was one boy, a few years older than me who didn’t just enjoy it, he thrived in it. He was a “theatre boy” through and through and as you can imagine, in our church group that meant something.

Because he must be gay, right?!

Now I’ve never been one to think every theatre boy is gay and really don’t spend time speculating about someone’s sexuality, but I have also never been able to figure out why it mattered. I don’t know what that time was like for him or how he found the strength to keep being himself, but I am so glad he did. And I wish I had been able to say more or do more, and been more of a voice to shut down the whispers. I also wish I would have had whatever I needed to reach out and let him know that there was at least one person who wasn’t fussed over it. There was at least one person who believed he mattered simply because he existed.

I don’t live with many regrets but that is most certainly one. It is an experience that has stayed with me and even from the sidelines, became a defining moment in how and why I love. 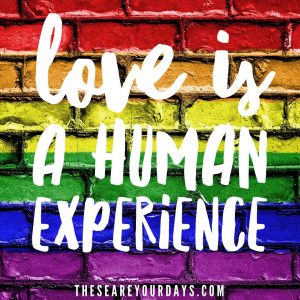 As a result, I have been intentional in and committed to creating love based spaces and energy in my life, within my home, and especially for my children. It is imperative that they know this open support extends first and foremost to them because as they are navigating their world, learning life lessons and discovering themselves along the way, they need someone who genuinely has their back. Someone who will love, support, and defend their right to be themselves, and who won’t impose their own restrictions onto them. Someone who isn’t fussed about the details, or who doesn’t just love IN SPITE of them but BECAUSE of them. Someone who loves them simply because they exist.

And I’ll be damned if that someone isn’t me.

As I said in a recent Facebook/Instagram post, “My purpose as their mother is not to tell them who I think they should be but rather, to love, guide and nurture as they show me who they are meant to be.”

And I fully intend on doing just that, with my kids and with anyone I welcome into my life and home.

I have no room for whispers.

Be who you are, believe what you believe, dress how you dress, love who you love.

There is no closet here

These Are The Days {and a new look} #thesearethedays #makingmemories

Join The Kaleidoscope Effect on Facebook, an awesome community of empowered women with conversations and training on a wide variety of topics!

I Was Made To Holiday