Sometimes I Choose Myself Over My Kids

It’s okay, at one point I would have gasped too. We aren’t ever supposed to choose ourselves over our children – once we become parents, THEY become the priority. I get it, I really do, and my children are absolutely my highest priority. Always have been, always will be.

But I have learned that sometimes I get to matter too, in some cases, even more. Here are some ways I’ve chosen myself over them:

Although becoming less frequent, there are still tears shed for the loss of Axel and let me just tell you, it flat our breaks my heart every time.  My kids mean no harm in expressing some confusion and anger at the decision, and I have absolutely given them the space to do so. They are allowed to be angry and hurt, sad and confused. And even though they understand the why, they still don’t *understand* – nobody does. Unless maybe you’ve felt that anxiety and paralyzing fear at the potential for your animal to harm someone, or you or someone you know has been the one harmed, or if you’ve been caught in the middle of an animal altercation and felt the sheer adrenaline rush of terror at trying to break it up, then you likely do. But they don’t. They saw it, yes, but they don’t understand the depth of responsibility that hung on my shoulders from that and a few other scary experiences that followed. It was mine to own and mine to carry, and ultimately mine to fix. So I did.

But it still hurts. It’s still sad. And they still wonder if another outcome was possible. I do too sometimes, even though the reality is that I obsessively considered and reconsidered every possible option, willing there to be another way. But there just wasn’t. Ultimately, it would have never been worth it if someone had actually gotten hurt. You might be thinking, like I often have and have been haunted by, that I’ll never truly know. But what I also want you to understand is this:

I never have to know

And that is perhaps the most freeing of all, that I never have to find out what was possible or be responsible for that kind of trauma again. And I will take all the sadness and tears and moments missing him, a hundred times over before I’ll ever let myself wait to find out.

Then we rehomed Salem. Sad and many tears but thankfully not nearly as heartbreaking, so we moved forward more quickly.

Then we rehomed Malibu. After initially planning to rehome her then deciding to keep her, to deciding again to rehome her….and following through with it, we became a pet free home. There were some bumps in Malibu’s journey which caused me added stress and grief, and copious amounts of guilt, but ultimately she found an amazing family who simply adore her. They have been able to give her all the things we did and all the things we couldn’t, and I will be forever grateful.

But still we miss her. The times when we are at home, we miss her. She belongs here. The problem was those times were not often and it felt wildly unfair to her, having her home alone for hours on end with only small spurts of human interaction. She had also become the barking dog when alone, which my neighbours were understandably unhappy about. And although we loved having her around, we also didn’t spend quality outside time with her like we should have. You know when you value having something but don’t value the responsibility. That was us, and specifically my kids. So even now, when they make comments that they miss her and we should have kept her, etc., my response is always the same:

But do you miss the responsibility?

Always a blank stare. Because they don’t, none of us do. And the reality is that they (my children) are gone half the time so during the times they are away, it all falls on me. I’m certainly capable but I also have to recognize and honour my limits. I’m not interested in running myself ragged to manage the pet owner guilt I felt. Not only do I reserve the right to have a personal life, I also recognize the need to be able to give my very best to my children, and having Malibu complicated it all. So even though choosing to rehome Malibu was in many ways, choosing myself, it was also choosing them AND even choosing Malibu too. It just feels like a really complicated and sad way to do it.

Not taking my daughter to a friend’s house

I try very hard not to say no to my children. I like being a YES mom and giving them space to be creative and build relationships, etc. So if they want to meet up with a friend, go to the mall, make something, etc., where scheduling allows, I say yes. I don’t say no simply because I don’t feel like it. Except for the time I did.

It was only a few weeks ago and I still replay it in my mind, despite feeling like it was absolutely the right decision. It was 930pm on a Saturday night, I was laying on the couch exhausted and with a headache (something I rarely get) when my daughter (13) asked if I could drive her to a friend’s house. I want to emphasize that this friend lives across the city but where I live, that still only means about a 15 minute drive tops, sooooo it’s sadly not a valid argument. I still want to use it though haha

I tried so hard to rally and put her first. I want her to have these experiences and I know how fun spontaneous get togethers can be, but I was feeling so unwell that I was not planning to be awake much longer. It wasn’t that I couldn’t take her there, it was that I couldn’t commit to bringing her home. And I refuse to ask the other parent, specifically one I don’t know, to manage that responsibility for me. Luckily, she understood though I still felt horrible and apologized profusely. Because I actually hate choosing myself first, it’s unfamiliar and uncomfortable territory for me.

Perhaps the thing I am currently the greatest advocate for is self care. When I started working out a few years ago, I made it my first priority, saying no to all sorts of things that were during my designated gym time. My goal was clear and my commitment, strong, and nothing was getting in the way of my personal experiment to see what was really possible. This set the stage for the efforts I put in now to keep self care a top priority. I can’t say I really ever put it BEFORE my kids – I’m not jumping in the bath instead of taking them where they need to be – but I absolutely indulge when scheduling permits, even when they are home. I know when I need some mental clarity, a bubble bath is the easiest and most effective way to do this. My kids mock me, often saying *Oh big surprise, mama is taking another bath…see you in a few hours!* hahaha 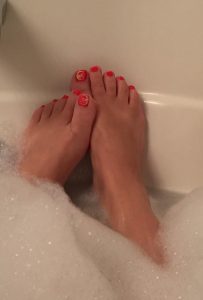 But it’s true. I’m not often in there for less than an hour, and while I’m still certainly available if they need, it is time just for me. It is the mental break I have come to crave several times a week, though really only get about once. My kids are older (13 and 10) so I realize it’s likely easier for me to carve that time out than someone with more or younger kids, so you have to find what works for you. But I make no apologies that this is one thing that works for me and my situation. I have no shame or guilt for filling my time in this way and whatever your self care is, you shouldn’t either. In my post Ten Blessings from 2017, I talk about other ways I have found to add self care into my life.

I firmly believe and have seen in my own life that the more we give ourselves, the more we have to give to others. It’s not about neglecting our responsibilities or about needing hours upon hours of self care, it can really be a simple 10 minute solitude break, helping a friend, or a quiet night at home with the ones you love that rebalances your energy. It’s more about shifting our expectations and giving ourselves permission to say no to things that don’t replenish us so we have more time to devote to the things (and people) that do. It’s essential, a necessary part of being our best selves. 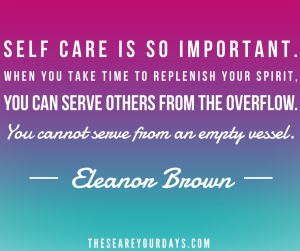 I absolutely love being a mama. It has always been the one thing I knew I wanted to be. Never hesitation, always anticipation, and I take my role and the responsibilities seriously. But what I’ve learned is that I have to let my needs matter too, and while it might seem foreign and that I am somehow taking from my children in order to do so, I have found the opposite to be true. And this is the message I want to give you: In choosing yourself, you are able to choose them more. Whether it’s your children, your significant other, or even your job, taking even the most minimal approach to self care will allow you to take  better care of your other obligations and responsibilities.

On the Outside – On the Inside #adoption #thesearethedays

In An Ideal World…