Jorie and the Magic Stones: A Book to Read with the Whole Family

I hardly give myself any time at all to read an actual book – I’ve learned the hard way more than a few times that nothing, ABSOLUTELY NOTHING else gets done when I have my nose in one. I can’t even confirm that I shower or the kids get fed. Ha! I literally and completely lose myself within the pages. So as you can imagine, I have to be VERY careful when I choose to indulge.

It’s also precisely why I’ve had this book for longer than I care to admit….but I’m here FINALLY and ready to give you my review of Jorie and the Magic Stones. Hold onto your hats, my friends, it’s a wild ride! 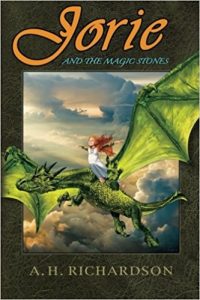 When Marjorie went to live with her frosty maiden aunt, she couldn’t imagine the adventures she would have with dragons — good and bad — and all the strange creatures that live in a mysterious land beneath the Tarn. The spunky 9-year-old redhead forges an unlikely friendship with an insecure young boy named Rufus who lives with his crusty grandfather next door. When Jorie — for that is what she prefers to be called — finds a dusty ancient book about dragons, she learns four strange words that will send the two of them into a mysterious land beneath the Tarn, riddled with enchantment and danger. Hungry for adventure, the children take the plunge, quite literally, and find themselves in the magic land of Cabrynthius.

Upon meeting the good dragon, the Great Grootmonya, Jorie and Rufus are given a quest to find the three Stones of Maalog — stones of enormous power — and return them to their rightful place in Cabrynthius. Their mission is neither easy nor safe, and is peppered with perils in the form of the evil black half-dragon who rules the shadowy side of the land. They have to deal with a wicked and greedy professor, the tragic daughter of the bad dragon, caves of fire, rocky mountainous climbs, and a deadly poisonous butterfly.

Jorie must rely on her wits and courage to win the day! Can she do this? Can she find all three Stones? Can she save Rufus when disaster befalls him? Can she emerge victorious? She and Rufus have some hair-raising challenges, in which they learn valuable lessons about loyalty, bravery, and friendship.

I’ll admit that it was slow going for me at first because the first chapter, titled Lord Fodomalk,  felt a little too similar to another well known fantasy series character (who shall not be named *wink*), BUT I got over it and honestly was quickly hooked. I’ve fallen in love with Jorie’s character and her friendship with Rufus, and often find myself grinning through the fun and suspense as I get lost in their adventures. It’s an easy read with easy to understand storylines, filled to the brim with adventure and magic, and is perfect for reading together as a family.  My daughter, despite being a complete bookworm, has an aversion to everything I suggest *cue eye roll* but I am convinced she’d love this so I will make it happen. haha

For now….it’s time for the sequel, Jorie and the Gold Key!

A.H. Richardson grew up in England, loving tales of flying mythical and magical creatures, and even once tried to pin wings on her pony, certain he’d be able to fly. Her father, famous composer, Clive Richardson, always encouraged her to write but her talents don’t end there. She also paints and sculpts, plays guitar, is a linguist (speaking FOUR languages!), acted in films and on stage, and has trained dressage competitors. Her imagination comes to life from her colonial estate in eastern Tennessee, in the magical Smoky mountains.