2 In Just for Fun/ Personal

We can’t be the only ones in the same boat. With Easter, Birthdays, and Christmas – even just for two kids – our house has been TAKEN OVER by toys. Stuff.

Everywhere, there is STUFF.

We don’t buy our kids a ton randomly, and in the last year especially, we’ve really cut back on the little impulse purchases. All it does is add to the stuff. The mess – that, let’s be honest, is a fight to clean up EVER. SINGLE. TIME.

{Okay, there are the odd times when they clean up happily, but not very often that’s for sure}

When it comes to planning their birthday parties, we generally have 10-15 kids at each party. That is a lot of STUFF. And quite frankly, we don’t want anymore in the house. So last year I felt like it was time to try the possibly tacky cash birthday party scenario.

She LOVED getting money

We did a $10 birthday party and committed to pooling half of it together to buy gifts for kids in the pediatric unit of our hospital. We have been taking gifts there any time the kids receive them {Easter, Birthdays, and Christmas} since Brooklyn’s first birthday. It’s become a really fun tradition and it was great to take it a step further and use their birthday parties as a bit of a platform. In addition, the other half of the money would be used to purchase something special they wanted.

Sidenote: I was worried the cash request would be seen as tacky, and in some ways I suppose it is, but the truth is….I find buying birthday gifts stressful {you too?} and thankfully I had several parents tell me they thought it was a great idea. In fact, I have a friend who copied the same cash idea for her daughter’s 6th party this year, as well as a few other friends considering doing it for their kids as well. I’m telling you – it’s genius.

Some chose to give more.

Brooklyn came away from last year’s party {her 7th} with about $50 to spend on gifts for the hospital kids and was able to add $61 from her 8th this year. {We kept the money put away but never bought the gifts last year, so we were able to combine it with this year’s}. Jonah’s 4th birthday party g ave him about $30 and he was able to add $35 from his 5th this year. So a total of $176!  Usually we purchase one toy from each kid so this was especially exciting!

At the end of the day this was a WIN/WIN for everyone. Parents weren’t stressed trying to figure out what to get, the kids were excited to receive money and still got to celebrate and have fun with their friends, we were excited not to add a bunch more STUFF to the house, and we got to help brighten the days of several children in the hospital – all while teaching our children about love, sacrifice, and service. I can’t think of a better way to celebrate honestly, and I don’t see us ever doing anything different. 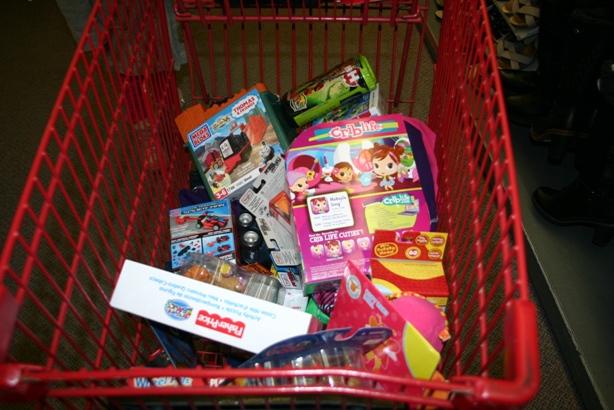 The stash for hospital kids

Something to note – this year we did cash parties based on their ages. So, Brooklyn’s was an $8 party and Jonah’s $5. Some chose to give more, though each amount was split evenly. And in cases where the total amount wasn’t perfectly divisible by 2, we gave the higher amount to the hospital fund {ie. Jonah came out with $65 this year, so $30 is for  him and $35 for the hospital kids}.

Tacky? Maybe {though I don’t think so}. Genius? TOTALLY