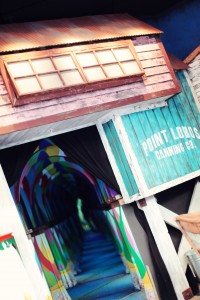 Monterey was such a fun stop! There were so many fun shops to see (though we didn’t dare venture in many of them with 3 young kids lol), restaurants to eat at, and fun things to do. The mirror house looked really fun, and the kids really wanted to try it out, so away we went. I’m kind of a poor sport when it comes to mazes and things like this – I like to know the right way and not spend hours stuck going in circles. But I was still in for the challenge.  I don’t remember what the cost was, but I remember thinking it was a little high….of course I was really impressed that it’s an all day pass kind of thing, so you can do it once and go back 5 hours later and do it again. Not many places are like that, so it certainly added to the appeal. 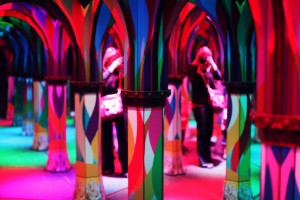 The Mirror House is really well done – it’s impressive to me how each mirror and doorway looks the same. It’s not a *move quickly through* kind of activity – unless you want a smashed up face and bloody nose I suppose. We went carefully, making sure that not only did we not smack into a mirror, but that we helped the kids avoid the same. We did not wear the included 3-D glasses – they made pretty much all of us a little woozy…it was best to avoid. The strobe lights are a little much (but likely only because I don’t love the sensation of not being able to see properly) and every time it went black we just stopped altogether. I am so not the daring person I once was. HA!

We actually got out rather quickly, and though we planned to go back (to make it more worth the money), we didn’t end up making our way there again. Honestly, I was okay with that…I enjoyed it, as did the kids..but once was enough for sure. Any longer and I’m certain I  would have been dealing with a little bout of nausea…am I just a wimp?

It’s definitely worth checking out, but if you have a weak stomach at all (ie prone to motion sickness), I suggest skipping this little gem. But if this kind of things is definitely your thing – check it out for sure! Time yourself, race your friends…wear the 3D glasses, etc. It really could be a fun little outing! 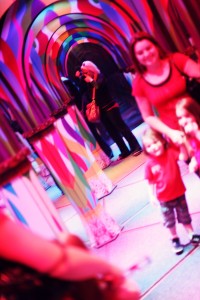 Nachomamatees – Tshirts for the Men!